Lafawndah‘s journey to her current incarnation as an eclectic artist, straddling electronic and contemporary R’n B with ’90s UK sounds, has unfolded as unpredictably as her compositional style. The indefatigable artist returned in September 2020 with ‘The Fifth Season‘, released by Parisian label Latency. In contrast to the industrial productions of her debut album ‘Ancestor Boy’, her second album presents a new degree of spontaneity and versatility in her process, which is also reflected in the various collaborations on the live show, which include percussionist Valentina Magaletti, Coby Sey(Synth/vocals) and many others. Fifth Season’s show is an incredibly exciting spectacle, with lighting and stage design, enhanced by a band consisting of keyboards, percussion, tuba and trombone. 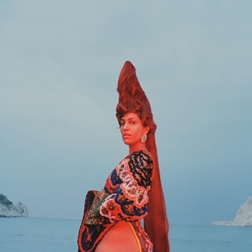